Today was SPACE DAY!! All the children enjoyed a fantasically informative presentation from UK Space Fund to learn about how computer programming and robotics are crucial to current and future space exploration and discovery. We learned about how robots may one day inhabit Mars ahead of humans in order to initiate 3D printed houses for them! The children had the opportunity to help programme Nao the robot to do lots of entertaining actions – her dancing was a hit! We were taught about the importance of accurate programming commands, which was demonstrated by instructing Nao to “count higher” than 1-10 which resulted in some unexpected high-pitched couting! Her dancing however, was defintely a hit! Volunteers from the audience were involved in demonstrating the movement of Mars and Earth around the sun, which is crucial to the timing of rocket launches. A ‘live’ skype call from a senior scientist at the UK Space Agency also encouraged the children to help consider which landing site would be best for a Mars Rover robot to land, and help determine which coordinates would be used to help programme it to do so. 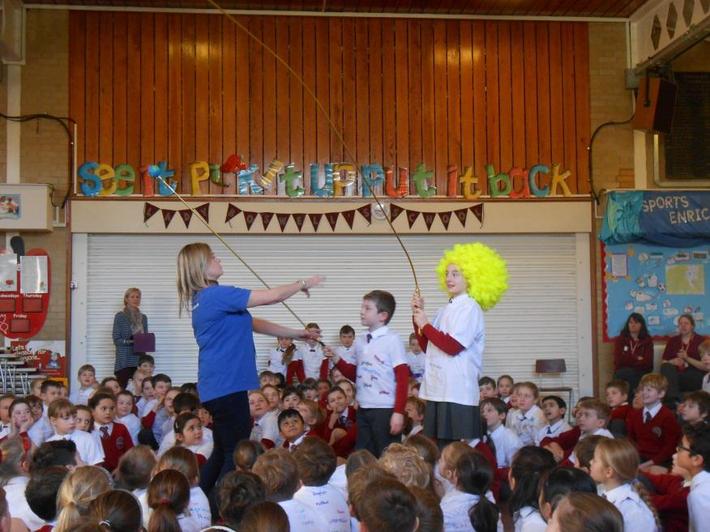 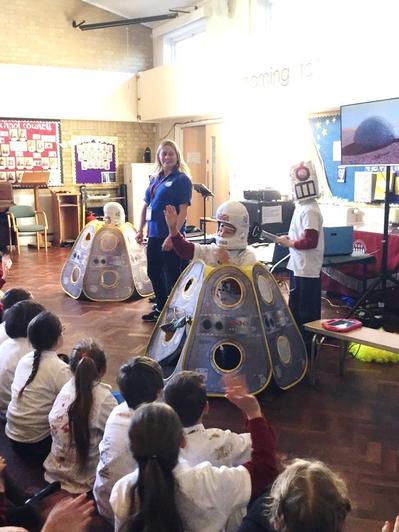 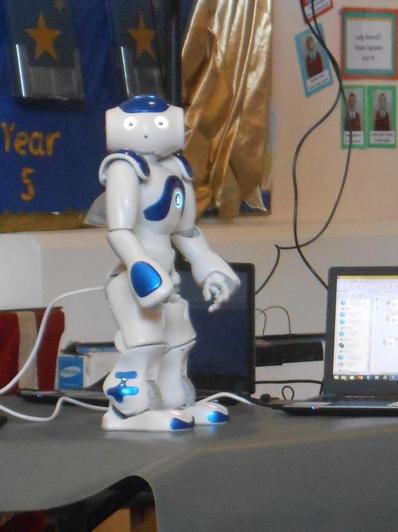 Today Chestnuts and Acorns were busy learning all about the planets and the solar system. They learned a lot about Tim Peake’s mission, studied rockets and stars and even made their own! It was a very exciting and messy afternoon as the children had fun on the moon and explored space goo and slime! 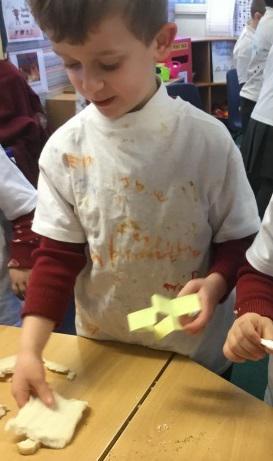 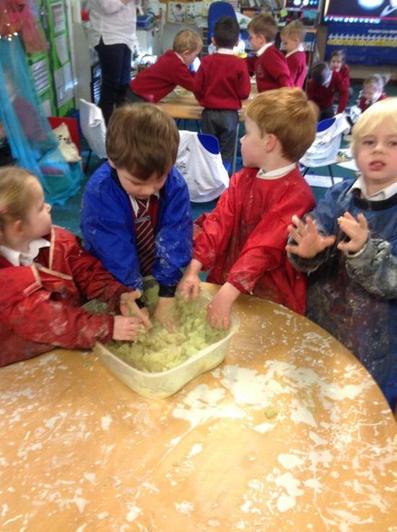 Year 1 carefully studied five different star constellations which we recreated using cocktail sticks and mini marshmallows (which they found a challenge not to eat!). They were amazed to learn about the darkness of space from NASA astronauts, and that stars can’t actually be seen from space!

It also got very messy this afternoon as the children exploded their own volcanos. We were learning about chemical reactions and seeing what happens when we combine bicarbonate of soda and vinegar. 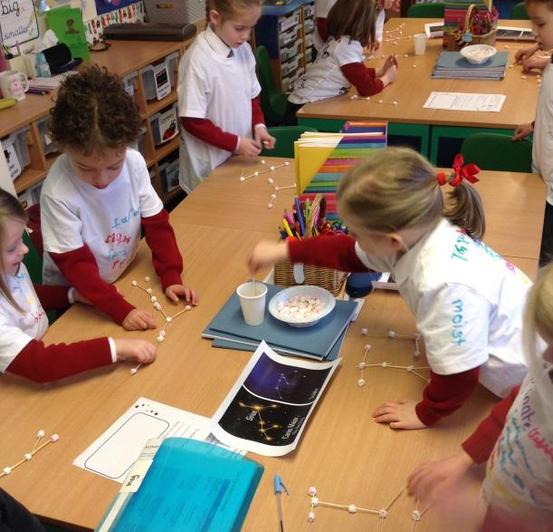 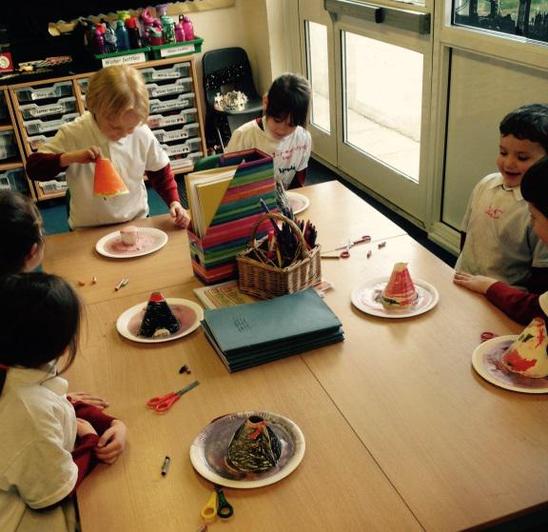 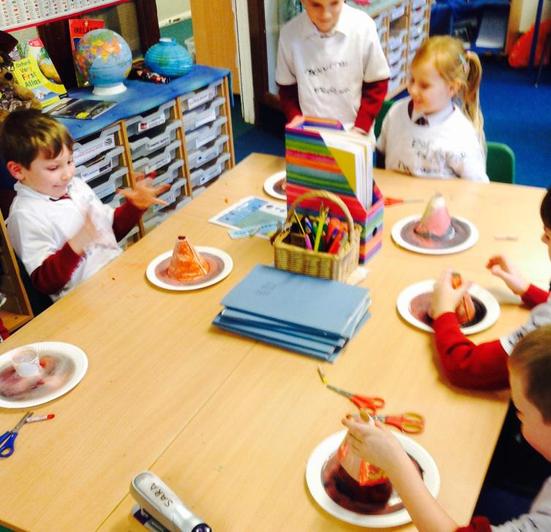 In the morning year 2 were investigating what happens when vinegar and baking soda mix. We put the mixture into bottles and the chemical reaction caused the balloons to inflate! In the afternoon we then learned about life on the International Space Station and wrote all about it on our science lab T-shirts! 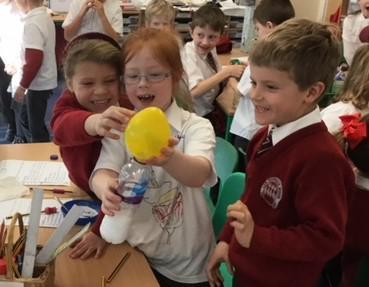 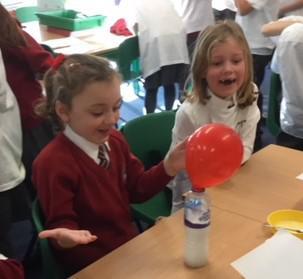 Year 3
Today, Year 3 were posed with the task of helping NASA to investigate which coloured material would be best to use for an astronaut’s visor – as well as considering the number of layers used. The children used UV reactive beads to measure how much UV light was passing through the different coloured materials and layers. Alongside visibility, this was important to consider ensuring the visor would keep the astronaut’s eyes safe from the strong UV rays in space. The children used their excellent scientific skills to carefully observe the shades of the beads and conclude their investigation. 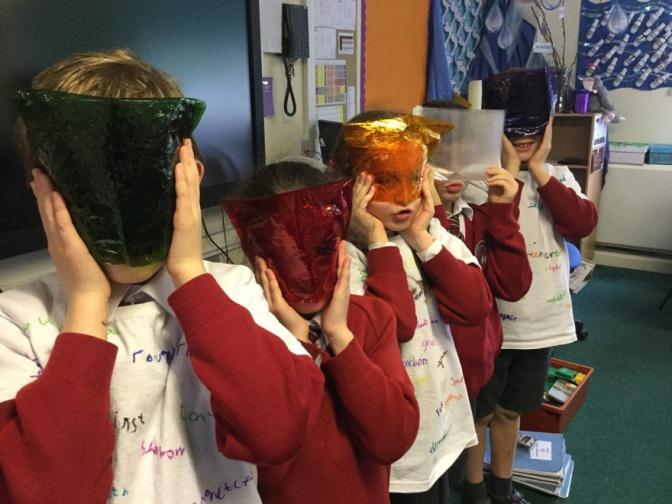 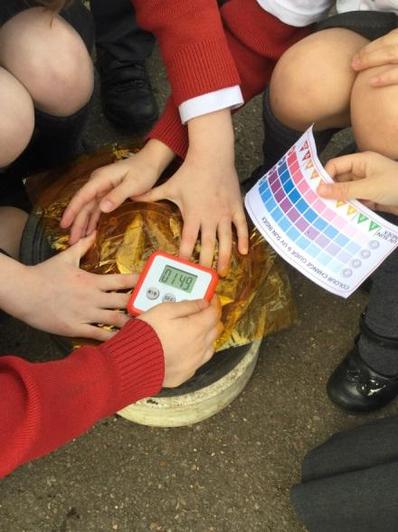 In Year 4 the children investigated soil samples that their teachers had kindly brought back from Mars, for evidence of microorganisms. They observed and recorded the changes in the soil samples, and were able to see that the presence of a microorganism (yeast) produced gas, which inflated the bags!

During the afternoon, the UK Space Agency gave the children a chance to use their Lego WeDo 2.0 equipment. The children built Lego Rover vehicles and programed them to move forwards, change direction, play a tune and change colour. They then had a chance to explore the programming options for themselves. The session ended with a chance for the children to show off their discoveries, making their Rover move, flash and use the sound effects.

A huge thank you to Otford Builders Merchants who kindly provided some of the materials to make our Martian soil samples. 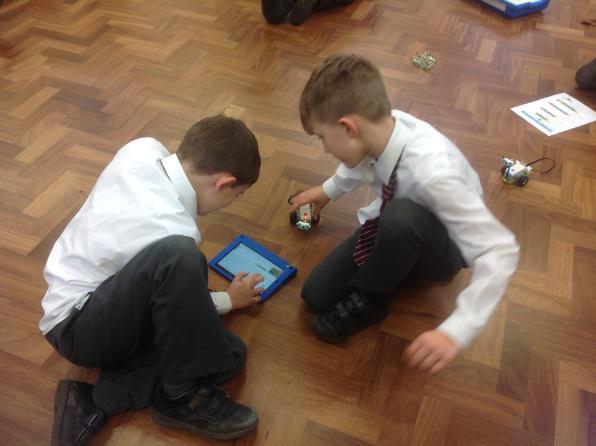 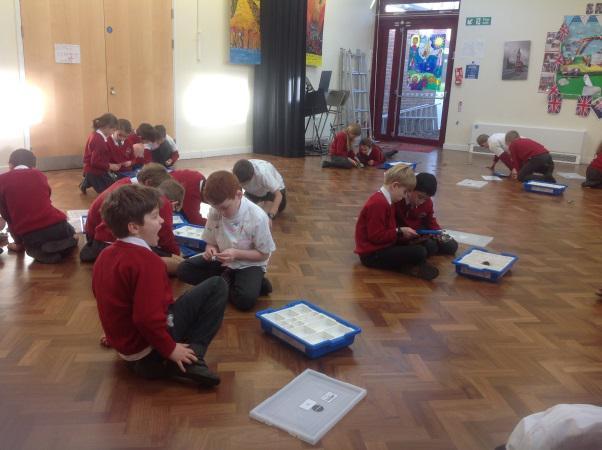 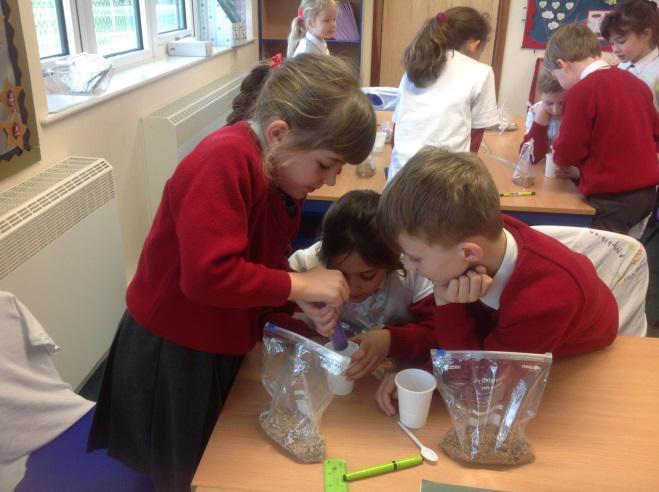 Year 5 carried out an experiment to try and find out whether UV coatings can block UV light from the sun. This involved placing some UV reactive beads in different mediums including water, oil, black tea and sun cream. We recorded our results using a UV colour chart which will be discussed and concluded in the morning.

During the afternoon year 5 took part in a group carousel of activities to test for irreversible changes. Great fun was had by all as we launched rockets in the playground, created plastic milk, popped corn and made toast!

Year 6 got active today to investigate the effect of different exercise on heart rate. They used resting heart rate as a control and compared it to heart rate levels during climbing wall, sprint, squat, plank and crunch exercises. The children then wrote up a comprehensive report, including a line graph, to present their findings.